"The Music of the Soul"

Composer and music producer born in Vilafranca del Penedès (Barcelona). Self-taught, he began composing shortly before he was 12 years old.

Leaving aside the work he has done for external projects (film, TV, advertising, multimedia projects, etc.), it is in his own discography (11 studio albums) where we find his most personal music, constructed as a diary where he expresses the feeling lived in his “day by day”. For this reason it is so difficult to pigeonhole it into a specific musical style. His compositions are the hybrid result that appears from mixing sounds without any kind of stylistic limit. Electronic sounds created with the most advanced software, very elaborate orchestrations, classical instruments such as strings or the piano, as well as the sound of electric guitars or traditional ethnic instruments. His musical pieces are small soundtracks, where in most compositions the voice is used as a pure instrument. For this reason the letter is phonetic and has no meaning. He defines himself as "Composer of Instrumental and Phonetic Music".

Among his cinematographic productions, the soundtrack for the official film in the history of F.C.Barcelona "Barça Dreams" (2015), directed by Jordi Llompart and distributed by Filmax International, stands out. Within the world of short films, the music for the short "Clones" stands out, a competitor in the official section of the Sitges Fantastic Film Festival (2015) and winner of the best international short in Los Angeles IFS Film Fest (2016). Directed by Rafael Bolliger with the actor Rutger Hauer known for starring in Ridley Scott's "Blade Runner" in 1982.

Roger has licensed and composed music for major international brands such as Shiseido, Swatch, Renault, Inverse or Ducati.

“Between Worlds”, a song from the album “XII (2013)” appeared under license in the film “Forever Young” (2018) directed by Li Fangfang. It was one of the highest grossing films of that year in China and the song was one of the most listened in NetEase Music Cloud (the equivalent of Spotify in China) accumulating more than twelve million listens in less than a year. Red Dragon is a hybrid of Western and Eastern epic music that Roger composed in 2021 to thank his audience in China.

Throughout these years he has had several recognitions and awards, among which we highlight being the winner of the Jamendo Awards (2011) as the best artist in World Music, receiving the award for the best soundtrack at the International Short Film Festival Visionicorte (Italy) with the short directed by Sergi Martí Maltas “La Banyera” or being a finalist at the Hollywood Music in Media Awards in Los Angeles (2021) for the composition “Letters from the Future” in the “Contemporary Classical” section, accompanied by the cellist María G. Figueroa. 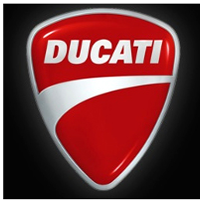 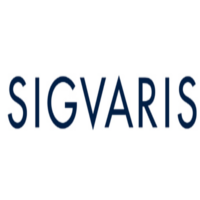 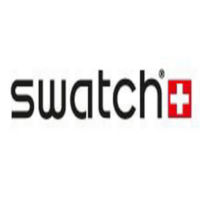 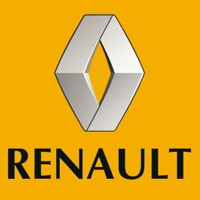 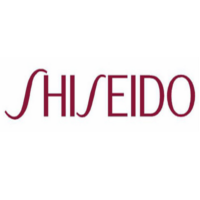 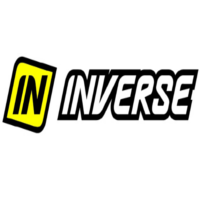 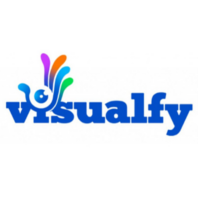 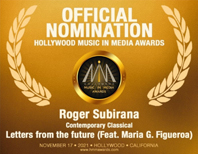 The composition "Letters from the future", finalist of the "Hollywood Music in Media Awards" in the category "Contemporary Classical". A work created with the collaboration of the extraordinary cellist Maria G. Figueroa @cellogaby. Roger always composes with very elaborate instrumentation. This time, he went to the essence of a melody and he wanted all the instruments to be played live.
The essence of a melody ...
2021
Best Soundtrack at the International S. Film Festival Visionicorte 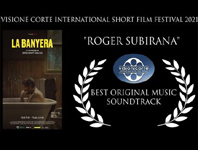 Roger Subirana receives the award for the best soundtrack at the International Short Film Festival Visionicorte (Italy). Short directed by Sergi Martí Maltas. The short film “La Banyera” has been the winner, also as “Best International Short”. And furthermore, on this occasion he has also won the award for best montage, which has been in charge of Jorge Macaya. A film starring Abel Folk and Paula Jornet.
A bathroom that will not leave you indifferent…
2021
Red Dragon. A tribute to the followers in China 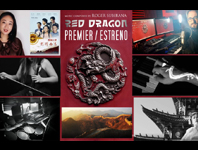 “Between Worlds”, a song from the album “XII (2013)” by Roger Subirana, appeared in the film “Forever Young” (2018) directed by Li Fangfang. It was one of the highest grossing films of that year in China and the song was one of the most listened to in NetEase Music Cloud (the equivalent of Spotify in China) accumulating more than twelve million listens in less than a year. Red Dragon is a hybrid of occidental and oriental epic music that Roger has composed in gratitude to his Chinese fans.
Beyond the Great Wall ...
2019
Magic Nights at Casa Batlló (Barcelona-Gaudí) 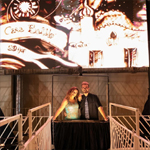 Didi Rodán is a world renowned sand artist. Creative and magical in equal parts. Roger Subirana accompanied her live for her time in Barcelona, where she performed a show based on the story of Gaudí and Casa Batlló. Although they had already done some project in common, that was the first time they had the opportunity to act together live and it was a really emotional and unique moment.
When the sand tells stories ...
2017
Point of no return 10th Anniversary 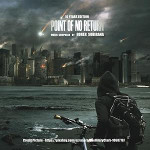 Roger Subirana has released a new version of this theme to celebrate 10 years since he composed “Point of no Return”. Over time, it has proven to be one of the most successful and emblematic compositions of all his musical carrer. Among other curiosities, this theme has been licensed for the Shiseido’s campaing in its 140th Anniversay and was also selected as soundtrack for the “Omar” trailer, a film nominated for the Oscars in Hollywood (2014), as best foreign film.
A decade of the Point of no return
2015
Barça Dreams

He has composed the music for the documentary film "Barça Dreams" (Filmax), a trip through the history of FC Barcelona that explains, by means of unpublished images and interviews, the reason why Barcelona FC is “more than a club”. The scriptwriter and director of the feature film is the prestigious journalist Jordi Llompart. In the soundtrack, which contains different musical styles, we can appreciate the unique versions of the hymn that the he has created exclusively for the film.
Barça Dreams, a dream come true
2015
Clones 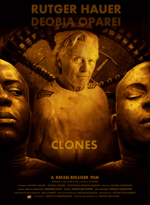 The composer has created the soundtrack of the film “Clones” .The short, fantastic and science fiction film has been directed by the young Swiss director, Rafael Bolliger and has been selected for diferent festivals around the world. To highlight here the participation in the official section of the Fantastic Film Festival of Sitges (2015). One of the film stars is the actor Rutger Hauer, famous for his appearance in the classic film Blade Runner back in1982.
Like tears in the rain
2011
Jamendo Awards 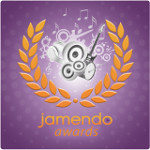 At Jamendo, the largest online Creative Commons music platform in the world, its music has exceeded 7 million listenings and more than one million downloads. But in addition, he has been the winner of the 2011 Jamendo Awards, in the category of "World Music" and finalist in the "Instrumental" category. It is a clear recognition of the public since the winners are chosen by popular vote.
Best World Music artist at the Jamendo Awards
Complete
Click here to see all works.
Creating...